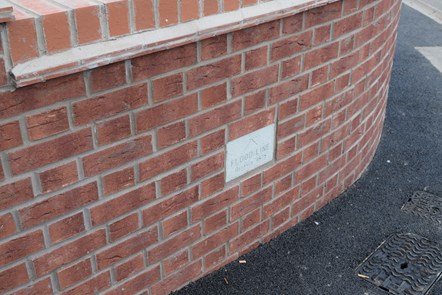 A piece of Burton’s history has been saved and restored to its former glory, ensuring the town’s famous flood of 1875 is forever remembered by future generations.

Trent & Dove Housing and its contractor Novus Property Solutions have carefully restored the original flood marker, which had previously been placed at number 137 Horninglow Street, opposite the National Brewery Centre. This is the second move for the marker, having been attached to the Allied Breweries gatehouse from 1875 to 1985.

The marker was treated by an experienced stonemason, who was specially sourced to ensure that it was restored to its former beauty. Weather conditions over the years had caused cracks and chips to develop on the marker, which needed sanding back and the border re-building to return it to its original sizing. The replacement lead letters also required a special order, which saw the project take around seven months to complete. The stone has now been protected by a layer of lacquer, and the letters will darken over time allowing the stone to blend in with its new surroundings.

The restored marker now stands proud at the entrance to Brewer’s Close, where 14 new properties have been developed by Trent & Dove Housing for affordable rent with a mixture of one-, two- and three-bedroom properties. The new residents were handed their keys in May and early June, as part of Trent & Dove Housing’s aspirational long-term target of increasing stock by 3% per annum via development, stock acquisition and partnerships.

Charlie Riley, development director at Trent & Dove Housing, said “We are delighted to restore a piece of Burton History by successfully saving the flood marker, which marks the famous flood in Burton, 146 years ago.

“Listening to concerns from residents keen to preserve the original marker, we took extra measures to ensure there that was no damage when we removed it from 137 Horninglow Street. It has now been placed back onto the site in perfect condition. As I am sure you can agree, the site looks fantastic, and we are very proud to provide the 14 affordable homes to those who need them most in Burton”.